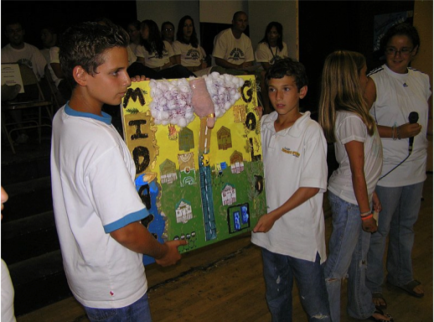 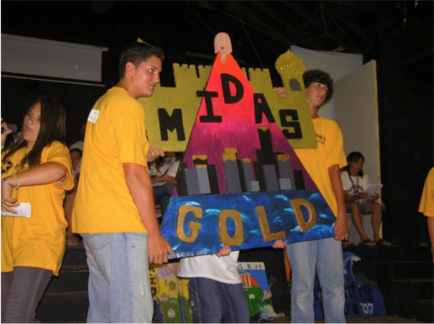 “The Rise of Midas”

By Becca Stoll and Chelsea Kutner

Prized for his kindness,

Shining through the blue sky,

On the blue seas

Ready to fight, he is

Victory, his goal, his reward

Best was he known

For a power, an action, a touch

Prized above all others

Midas Gold is us

We have been touched

Lead by the gods

By Rachel Kurlander and Emily Hyman

The power struggle of Color Week 2007 will be represented by the legends of Atlantis and Midas.

Midas, King of Phrygia, was a very noble, compassionate and kind king. He displayed these qualities when his farm hands brought him a satyr they had found sleeping in the palace gardens. Taking pity on the old man, Midas graciously set them free. This old man was Silenus, the satyr to the god Dionysus. Seeing Midas perform this good deed, Dionysus offered him one wish. Midas, thinking of the well being of this community that was economically unsound, wished that everything he touched would turn to gold. After a slight dispute, Dionysus reluctantly granted his wish.

Midas tested his new ability on a bowl of fruit, then stood on a stool before fully realizing his success. Eager to show his new power, he grabbed his daughter without thinking of the consequences. He turned to find his daughter was solid gold. Midas recognized his mistake and rushed to Dionysus to ask him to take back the wish, recognizing that his whole kingdom was in danger. Dionysus, seeing the regret in Midas, forgivingly accepted Midas’ plea. He told Midas to rinse away his power in the Pactolus River, which is now renowned for its shimmering gold appearance.

King Midas and our team, Midas Gold have many similarities. King Midas thought of his community first, just as we value the Iroquois Springs community. King Midas’ gracious and hospitable manner was rewarded with a wish, just as our sportsmanship and spirit will result in a win. Just like the King Midas, our team will recognize our mistakes and will not hesitate to correct them for the good of the team. Also, we realize that more importantly we are rich in friendship and compassion, rather than money. Similar to objects affected by King Midas’ power, our team is solid and strong. Using our power and our touch, Color Week 2007 will be turned to Gold.

And you know we’re gonna it

Color Week is ours to take

We’ve been fighting from the start

And we have all the heart

And we’re not gonna give up that quickly

And we keep on winning

No matter what we do

We have more spirit

We’re in it to be number one

So many games so many points

Bring us closer to our victory

Atlantis watch your back

Cause gold is ready to attack.

Verse 3:
At the track meet we win all heats

At the pool we can’t be beat

From art to apache relay

We are winning everything today

Gold is winning events of all sorts

We’re on top all the way

And we’re here to stay

The blue and gold (1) our summer home

When we’re home we are never alone

As today melts to yesterdays memories (1,2)

Although there is distance between us (1,2)

These dreams keep me right by your side

BOYS: Our bonds have held us together

GIRLS: For whenever I’ve needed your love

(SLOW) Forever our hearts beat as one