Paving the Way for the Future 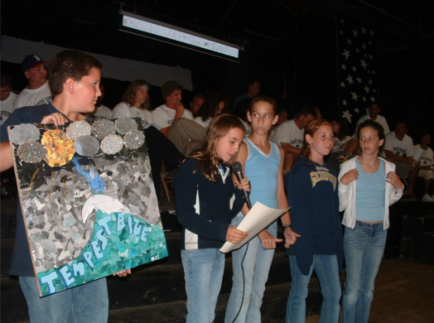 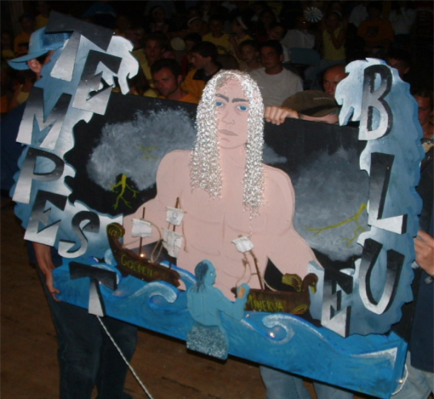 THE POEM
The beginning, it’s finally started.
A light wind blows, cool to the touch, stirring up turmoil along the way.
No time to prepare, the clouds are rolling in, casting a shadow upon the enemy.
Now alert, her destiny revealed, while confusion and fear take over.

Trapped within this state of chaos, Minerva can’t escape.
The wind, no longer wind itself, is encouraged by rain and power.
The pace speeds up, Minerva’s lost, the storm uproars with anger.
This tempest, reaching its highest point, peaks furious with determination,

The opulent kingdom of Milan housed two rulers – the Duke, a powerful magician, and Antonio, his vengeful younger brother. While Antonio thirsted for Milan’s dukedom, Prospero was content with his books and magic, and uncomfortable with his seat of power.

Antonio’s greed led him to hatch a scheme to unhatch Prospero. The conniving royal sent Prospero and his younger daughter, Miranda, into exile on an uninhabited island.

The years went by and Prospero lay in wait on his island paradise, bringing the island natives under his enchantment and plotting his revenge on Antonio.

Prospero’s daughter, Miranda, grew into a young woman, and Prospero’s opportunity arose. Antonio had set sail with his son, Ferdinand, and was sailing by Prospero’s secluded hideaway. Antonio and his royal were returning from a wedding when the seas began to turn – Prospero’s revenge had begun.

The Duke and his crew were tossed about in swirling seas as Prospero raised the heavens against the royal yacht. Lightning streaked across the sky, black clouds crowded out the sun, and the waves thrashed the Duke’s ship from side to side. Prospero’s tempest brought the vessel to its breaking point, casting man, beast and ship into the ferocious sea.

When the sun rose the next morning, the shipwrecked party struggled onto the beach, unsure of their surroundings, vulnerable to attack. Prospero gathered his spritely spirits about him and proceeded to engage Antonio and his gang in a complex game of cat-and-mouse.

Weathered and weary, Antonio’s crew were no match for Prospero’s wit and powerful magic – the usurping Duke was brought to justice by Prospero’s unparalled mind and power.

Chaos was set in motion by Antonio’s scheming and it took the powerful winds and rain of Prospero’s tempest to restore justice in the world.

William Shakespeare’s story of The Tempest provides the inspiration for our team name – Tempest Blue. Like Prospero’s unseating, Color Week throws Iroquois Springs into chaos and the battle between the Blue and the Gold is the only thing which can restore balance in our world.

The Blue Team must harness the mighty tide and raging wind of the tempest to take their place as the rightful victors of Color Week 2003.

(Tune: Unknown… If you know it, please get in touch!)

Cause we’re stronger
And we’ll conquer
This will be our victory, our chance to reign supreme yeah.