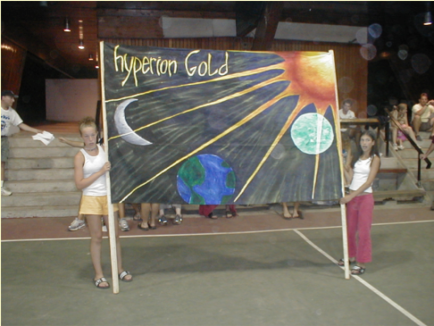 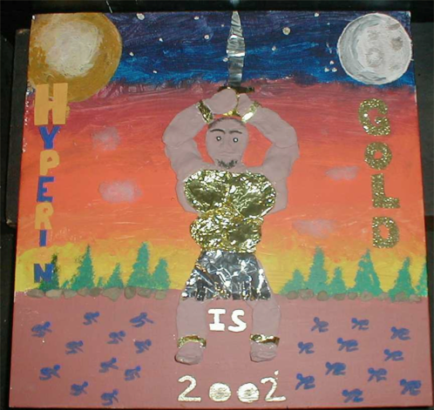 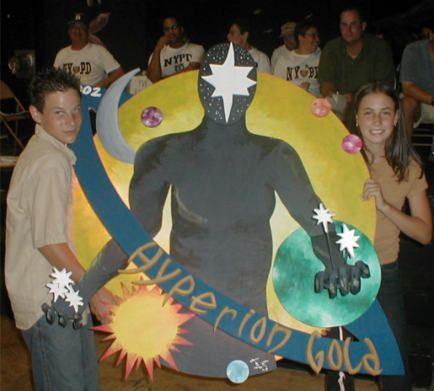 The burning sun, the bright moon, and the dimness of dawn
All created by one powerful Titan
The Titan of night and day, Hyperion
He who goes before the sun, not yet the sun
The name given to a great creator, Hyperion
Eos, the dawn, a beautiful G-ddess
Titled as the morning star
Carried by a silver chariot
Accompanied by four powerful horses
A daughter of Hyperion
Selene, the moon G-ddess, teacher of magicians and sorcerers
Dressed with mysterious wings and a halo of pure gold
A form of light with an inner glow
Helios, the most powerful light, the G-d of the sun
Ventured on a golden chariot
Journey through the sky to the west
Leaving his eastern palace behind
Returned on Oceanus which girded the Earth
Selene, Helios, Eos, the three siblings who ruled the changing hours of day
Hyperion, who created the day
Uranus formed Hyperion, an omnipotent, brave, strong, Greek G-d
Hyperion with its powers will take control and win!

Think back to a time when the Titans ruled the universe, long before our era. Two superior beings, Uranus and Ge united and conceived eleven brilliant children, and the Titans commenced. These devine pieties came to be known as Okeanos, Koios, Kreios, Iapetos, Theia, Rheia, Themis, Mnemosyne, Phoebe, Tethis, and Hyperion. Of these eleven, great Hyperion did join with Theia to create three powerful and repute G-ds and G-desses. They were called Helios, Eos and Selene. Each of these imperial creatures took power to a significant job, determining the night and the day.

Helios became the G-d of the sun. Each morning he would depart from his castle in the east, and venture across the sky in a golden chariot. Eos was a g-ddess of the dawn. She was a beautiful lady, in a chariot drawn by four horses, who became known as the Morning Star. She was the first form of light; the break of day was in her power. And then there was the radiant Selene, the G-ddess of the moon. She was a delicate woman who traveled on a silver chariot, drawn by two stunning horses. As her brother Helios crossed the sky on his journey, she began hers. The actual moon was the reflection of light on her pale body.

Three immensely powerful G-ds, all created by one Hyperion. He was the first person to ever understand the movements of the sun, moon, stars and seasons. He became known as the father of these natures, since he was the premier creator and follower of them all.

Hyperion was a powerful and respectable ruler. He represented honor, responsibility, and strength. He was part of a great family, who together ruled the changing of the days, an incredible accomplishment. Hyperion Gold represents the family of the Titans. We work as a team to get through each day, as we are also a family, representing Hyperion and his Titans. Together we will strive and use our strengths to defeat Janus Blue. Hyperion will once again reign supreme throughout our camp, and the universe.

“Eye of the Tiger” by Survivor
Gold is here, ready to conquer
Staying strong, we show no mercy
Gold’s proved success
And we’re not stopping now
Blue watch out, cause we’re here to survive

CHORUS:
We are (1)
Golden Hyperion
We’re ready to fight
Rising up to the challenge of our rivals
Janus Blue
Watch your back
In the pool and the track
Gold will reign overall and stand tall (1)
Hyperion Gold
Gold is here (1)
No doubt in our minds
Got the spirit
Got the power
We’ve overcome
And we’re proud as can be
Hyperion (pause)
We are the light

CHORUS:
We are (1)
Golden Hyperion
We’re ready to fight
rising up to the challenge of our rivals
Janus Blue
Watch your back
In the pool and the track
Gold will reign overall and stand tall (1)
Hyperion Gold

But the Blue and the Gold, not only tonight
We’re bound to return again

With you my friend
Holding me close
And here we are again
Another winter to pass
Like a moment in time, awaiting the start
Waiting to come home