From scattered ashes in a nest of cinnamon twigs,
The Phoenix is reborn
Renewing Gold’s strength in a burst of fiery flames
Hungrily they lick at his powerful beak,
Roll in waves down his back,
And dissipate one by one into the cold air surrounding him.
He looks around him from the peak of a mountain
Whose rocky slopes open into a wide valley of trees,
Their branches yawning, stretching groggily into the night
As if the stars are just barely out of reach
The Phoenix is centuries old and a newborn at the same time
He can’t quite remember having flown before
But he takes flight effortlessly
As if he has been made for the sole purpose of doing so
Zooming over the trees he ceases to be a separate entity
And seems to become part of the air itself
As the group below whizzes by in a blue of dazzling color and light
The song of the Phoenix lifts into the skies
A joyous medley of pure, crisp notes
Echoing through the starry night
A song of excitement and laughter
Of teeth-gritting competition, cheering and sweat of long embraces and tearful goodbyes.
Finally he reaches a glistening ocean of blue
And swoops down to the surface
Staying barely above the burbling ripples
So that the hot flames of his beating wings dance along the water
Scalding gold meets icy blue
In a gliding stream of motion
Just like the legacy of the blue and gold
The Phoenix will live on to infinity.

We are representing the Phoenix for Color Week 2008.
The Phoenix is a mythical bird that lives in Phoenicia. It is the only one of its kind. The bird, feathered with the arrangement of red and purple, has a striking golden tail. The Phoenix became popular in early Christian literature. It was first identified in Egypt; although, the Greeks documented the bird by “Phoenix” meaning crimson or purple-red.
The Phoenix was a symbol in many different cultures all around the world, such as the Egyptians, Chinese, Japanese and Arabs. The bird had many different names such as Bennu, Feng Huang and Hou-Ou. The Phoenix, being a part of many customs is a figure of diversity. In Egypt, it was usually depicted as of Heron, but in the classic literature as a peacock or an Eagle.
Towards the end of the Phoenix’s life span, which could be up to 500 years, it begins its rebirth cycle. The Phoenix builds itself a nest consisting of spices. Soon after, the nest bursts into flames and turns to ashes. A decaying flesh is made and sucks up the juices from the nest. When it has enough strength, a new Phoenix is born, and is destined to have similar qualities to the previous Phoenix.
The Phoenix, just like the friendship of the Blue and Gold is immortal and invincible. The bird is not only associated with rebirth, but peace as well. The Phoenix is a harmless creature that lives on dewdrops. It uses its powers to bring comfort, and end suffering. Just like the Phoenix, the Gold Team will always stay strong and will extend its hand to any team or person. If the Phoenix is injured it can heal itself, just as the Gold Team can pull up from losses.
It is an honor to have the Phoenix represent the Gold Team because of its fierceness and strong ability to start and finish with pride. The Gold Team is the rebirth of past color week teams at Iroquois Springs. At the end of color week, the Gold and the Blue will reunite at Iroquois Springs and live peacefully forever.. on dew drops. 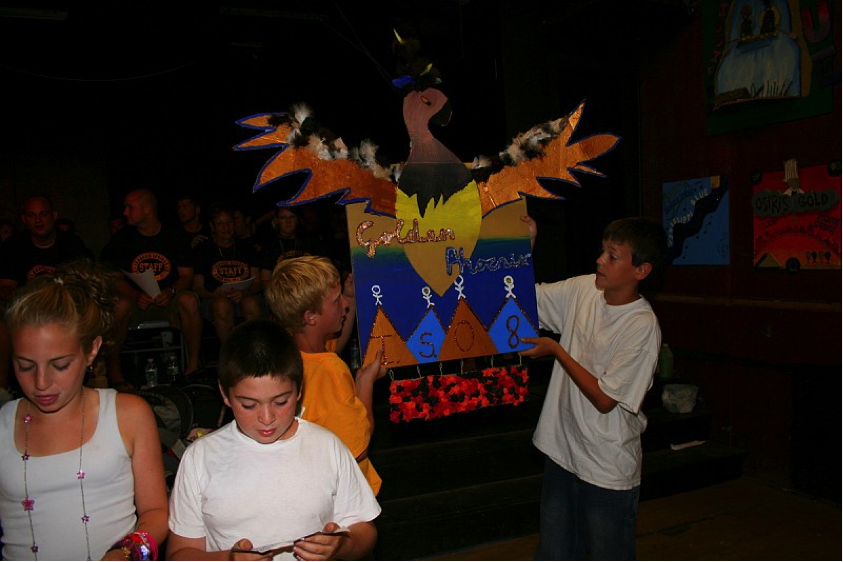 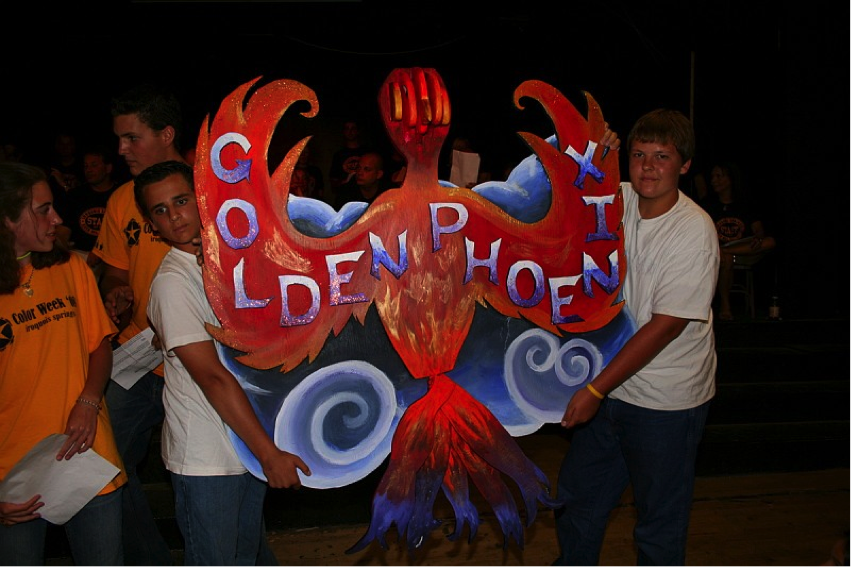