The Magic of Iroquois Springs

“WE’RE NOT LEAVING!!! WE’RE NOT LEAVING!!!” The familiar chant intensified as the final hours of an incredible summer passed by much faster than any of us would have liked. I wish that this defiant chant could have somehow stopped the hands of time and extended the summer just a little bit longer, but the sad reality is that all good things must come to an end.

My final year at the sleep-away camp that defined my childhood took place nearly 30 years ago. Not a summer has gone by since then that I haven’t longed to recapture the magic that cannot possibly be defined by words. It simply must be experienced to be understood.

This year, I finally turned the dream of returning to camp into a reality, and recaptured the magic that has eluded me for nearly three decades. While this could have theoretically happened if I had worked at a different camp, it’s hard to believe that it would have compared to my Iroquois Springs experience.


When I look back upon my first year at Iroquois Springs – after the passage of time has chipped away at the sadness that comes with saying goodbye – I won’t remember the dark skies and rain that bookended the summer. I’ll remember the sunny days in between…the smiling faces, the laughter and the pure joy on the campers faces as they formed and strengthened bonds that will last a lifetime.

The bonds that we made, campers and staff alike, were shown by all on the bittersweet last evening of camp.

Before the symbolic burning of the year took place at the lake, the speeches that were given left very few with dry eyes, and even fewer dry eyes after the singing of the alma maters.

The surprise of the evening for me was getting to see the softer side of Bubba. His usual quick-witted, boisterous delivery was replaced by heartfelt words, and a crackle in his voice brought on by the emotion of the moment.

Not surprising at all was the speech that Mark gave to begin the evening.

One of the things that I love about Iroquois Springs is the passion and genuine gratitude that starts at the top, creating an atmosphere that is unlike any other that I have ever experienced throughout my years as a camper or in the workplace.

Two moments during Mark’s speech really hit home for me…

The first is when he told us that the 321-day countdown to the summer of 2014 was about to begin. 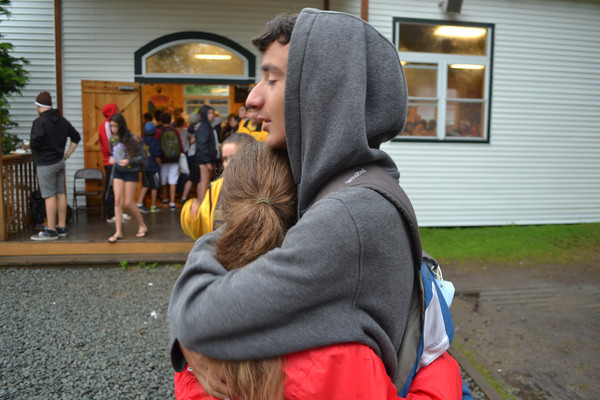 I can only imagine that many owners, especially those like Mark who literally do not leave the camp grounds for 42 straight days, would view the end of the summer as a time to take a break, rather than the time to start counting down the days until he can do it all over again.

The second moment that stood out for me was when Mark spoke about the words that appear on the back of our staff shirts… “I AM THE DIFFERENCE MAKER…” It is a powerful statement that I didn’t take lightly, and tried my best to achieve.

Most days, you can only hope that you are living up to these lofty expectations because kids tend to live in the moment without acknowledging any impact that you’ve made on their lives. But in the waning days of the summer, as we spent our last moments together, a number of kids showed me that I had, in fact, made a difference.

After Color Week ended, there was one day of regular programming, but it didn’t feel “regular” because we all knew that camp was basically over. The first two periods after lunch were quiet on the baseball field, which is something that wasn’t entirely unexpected.

My last hope to take the field one final time was the dedicated younger boys who have a passion for baseball that is unrivaled at Iroquois Springs. However, given the fact that it was the last period of the year, and it had been raining off and on throughout the day, I figured that I was done for the year. But like a scene out of a movie, my disappointment quickly dissipated as I saw the first kid walking down the path with his baseball glove. One by one, they all arrived, ready for one last baseball game of the summer. Those 15 boys didn’t know it at the time, but they made my day just by showing up.

At the end of the game, I sat them all down to thank them for being the most dedicated group of baseball players in the camp. Before they left, I gave each of them a baseball that we used during the summer to reward them for their dedication. The joy on their faces was thanks enough for me, but what I got in return was so much more. Handshakes and hugs were followed by them thanking me for teaching them baseball.

One of the boys asked if anyone had a pen after all of the balls were handed out. Thankfully, one of the counselors had one in his pocket and gave it to him. He brought his ball over to me and asked me to sign it. The other 14 boys got in line behind him to have their ball autographed. An incredible moment that I will cherish for many years to come! In one fell swoop, the words on the back of my shirt were validated…“I AM THE DIFFERENCE MAKER…”

At the lake, and at the ice cream party that followed, a number of the older boys came up to me and we said our goodbyes. Some expected, some unexpected. Each asked me if I would be returning next year, and told me that they hoped that I would. Even those who spent limited time on the baseball field thanked me. It was truly a humbling moment.

I waited nearly 30 years to experience these 42 days, and I can honestly say that it was well worth the wait. The magic of Iroquois Springs…

The strength of blue and gold…

The 321 day countdown has begun…